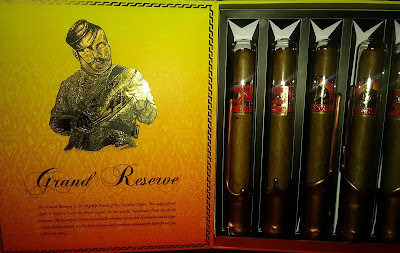 There is no better way for one to let their man know he is “SMOKEN HOT” than by gifting him with a box of the world's best cigars.

Cigars are the ultimate symbol of celebration and are perfect for guys of all ages. You will love the quality and uniqueness that Gurkha Cigars are recognized for because of their superior product and ornate and embellished boxes and packaging. When someone receives a Gurkha Cigar box they have something they want to keep forever.


Please feel free to visit www.gurkhacigars.com and check them out.

As for Valentine’s Day gifts for women, cigar smoking is on the rise with women too. Here are some facts about women cigar smokers in general that just came out from the International Women’s Cigar Society.
500 women were surveyed
48% smoke 8+ cigars per month
87% own a humidor
54% own a travel size humidor
73% say their smoking has increased over the last year
61% get recommendations on their choices of cigars from their friends; 56% from their tobacconist
88% do not keep track of their cigar purchases
95% get cigars as gifts
94% say they are not offended by scantily clad women in cigar ads
67% prefer to smoke Robusto size cigars or larger. Bigger is better.
And finally, 78% say they do not want a cigar made especially for them. It is not important to them to be singled out as different from male smokers.

Gurkha began manufacturing cigars in 1989 and soon became one of the most famous brands of luxury cigars in the world. Bill Clinton, Bill Gates, Carlos Slim and an assortment of global dignitaries, world leaders, government officials and celebrities as well as the Special Forces and Seal Team Six are all clients. Having extraordinary quality, premium blends of tobacco and a reputation for unparalleled excellence, Gurkha now offers 48 distinct brands of cigars. It’s no wonder they’ve found their way into the ultimate institution of celebrations.

I received this product in exchange for this post.