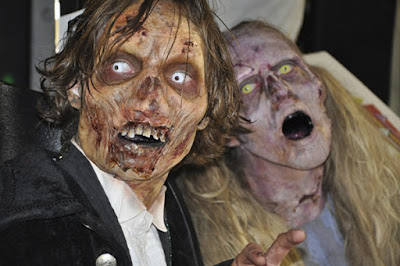 It’s here. Six Flags Over Georgia—the Thrill Capital of the South—announces 20 spine-chilling haunted attractions await those who dare to enter Atlanta’s largest and most horrifying Fright Fest® beginning September 23. The annual Halloween event ramps up this season with eight new attractions, more than 200 zombies and monsters roaming throughout  the park and more than 30 world-class rides and attractions with terrifying roller coasters…in the dark.

“Fright Fest is the biggest and scariest Halloween event in the entire Southeast,” says Park President Dale Kaetzel. “This year, we taken up the fear factor to a whole new level with terrifying new scares combined with our most popular haunted attractions, as we transform from the Thrill Capital of the South to the Scare Capital of the South.”

Fright Fest will feature the return of many guest favorite haunts and numerous new and unnerving attractions, including:

·         Camp Slasher, a new haunted maze, where a demented counselor will give those who visit his campground a lesson in dissection;
·         The Good, The Bad and the Undead, a new scare zone, from a long forgotten western town, inhabited by ghostly cowboys from beyond the grave;
·         The Revenge of Mariner’s Cove, a new scare zone, featuring treacherous pirates seeking revenge on anyone who comes near their treasure; and
·         The return of the award-winning Dr. Fright’s Dead Man’s Party musical at the historical Crystal Pistol Music Hall.

During opening weekend of Fright Fest, the park will host its annual Blood Drive with the American Red Cross. Guests who donate one unit of blood will receive a free admission ticket to the park (up to the first 100 guests). Season Pass Holders will receive a voucher for one free maze visit.