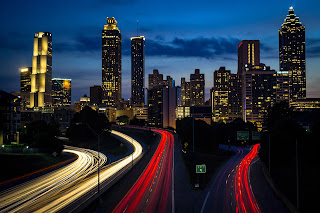 Day or night the city of Atlanta shines bright amongst other cities in the Southeast because of its consistent innovation and rejuvenation.
The city of Atlanta and its surrounding areas are in the mists of an epic expansion and transformation. The skyline is morphing as new skyscrapers and buildings take their place among the well-established construct of behemoth structures. One of the most robust and populated cities in the South is taking its place amongst the pantheon of impressive US metropolitan areas experiencing an unprecedented growth spurt. From Buckhead to Woodstock and Peachtree City to Decatur, change is in the air and the energy it infuses into the local vibe is palpable and contagious.
In just the last five years, we have seen the destruction of the legendary Georgia Dome and the opening of the revolutionary Mercedez Benz Stadium. Cobb County opened its doors to its premier professional sports arena with Suntrust Park. NCR World Headquarters invested in a glimmering new Midtown office building which perfectly reflects the gorgeous Georgia sunrises and sunsets. Avalon is the quickly developing mixed-use living, retail, and entertainment development in Alpharetta which is bringing a high-end lifestyle environment to those living outside the perimeter (OTP). Skyview Atlanta wheeled its way into the heart of downtown in 2013 and has been providing thrills and breathtaking views ever since. Even downtown Gainesville is getting in on the action with over $52 million in new construction happening on the ground floor of Parkside on the Square.
The list of ribbon cuttings due to new construction goes on and on.
There are innumerable advantages to this spike of ongoing construction. The influx of jobs created for the construction process and those needed to sustain the businesses once they open their doors, escort in a healthier economic climate for locals. These changes spark an excitement for tourists and give people more and more reasons to visit the former host city of the 1996 Olympic Summer Games. They also provide an infrastructure which is appealing to other large event committees looking for future locations for their occasion. For example, Super Bowl LIII will be hosted in Atlanta in February 2019. One of the decisive reasons the Super Bowl Host Committee chose the Peach State for the largest televised American sporting event was due to more than just the Falcons recent rise in the football ranks. The stadium with a retractable roof and the world’s largest video board certainly added to the appeal. 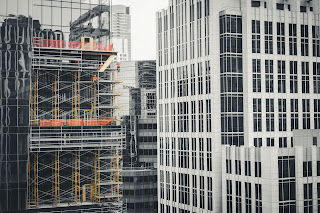 Every story and staircase, elevator and escalator add to the upward mobility of the skyline in the Peach City.
To make such sweeping changes in and outside the city there is a lot of work which must happen behind the scenes. It is so much more than just a couple cranes and several construction crews. The architects, civil engineers, designers, city planners, environmentalists, politicians, and site managers needed to get the jobs up and running are essential to the process. Many of the people you come into contact with on a day-to-day bases play a pivotal role in the process. Your neighbors, friends or family members may be directly or indirectly working on different elements of the ongoing development. So in many ways, these changes affect us all in a very tangible manner.
One company who helps many commercial and residential development projects get started is J.T. Magbe Contracting, LLC. J.T. Magbe specializes in all forms of site work including grading, excavating, utility pipe construction, such as sanitary sewer, storm sewer and water, retention-detention pond maintenance, forestry mulching, clearing, and brush mowing. They have over 20 years of heavy civil construction experience in the North Georgia metro counties and they have helped many different companies and individuals realize their ultimate land-use goals and increase the values of their properties.

Source: jtmagbe.com
J.T. Magbe has differentiated itself from competitors because they are unrelenting in their execution, attention to detail and client service. They run their business based on an unwavering philosophy to provide each of their customers with the highest level of service and personal attention while maintaining a competitive cost and efficient schedule.  J.T. Magbe recognizes the challenges and risks associated with the construction industry today and they utilize the experience and knowledge gained to ensure each client's project is completed at the highest quality possible.
Making a positive impact on each project, each neighborhood, and each large metropolitan area in which they work is one of the founding principals of J.T. Magbe and it is one of the reasons they can proudly pronounce they have played an essential role in the ongoing transformation of the city-scape.